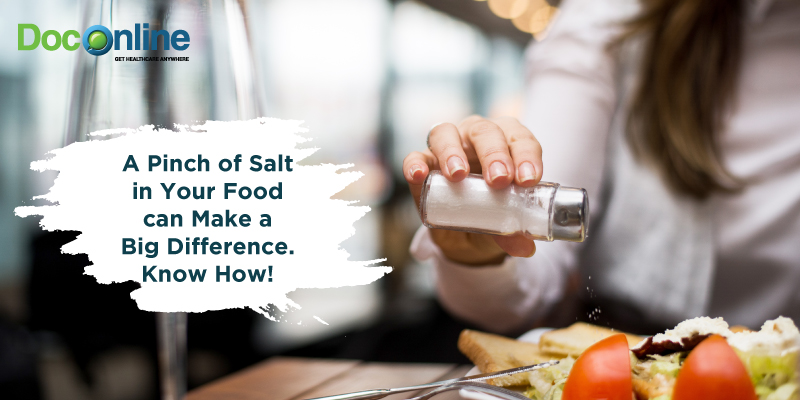 "A proverb is to speech as salt is to food" - goes the adage!

Imagine the sight of a hot dish served at the table, the waft of its aroma tantalizing your senses. You take a teaspoon of it, taste it and then realize something is missing. No sooner than you have figured it out, you dash for the salt!

But wait! Have you considered that while you may want your food to be tasty, you are also putting your health at risk by consuming salt in excess over a period of time?

Salt, primarily consists of 60% chloride and 40% sodium, though mostly it is referred to as sodium only. It’s a very important ingredient in the food that enhances taste and has a direct impact on the health and well-being. Hence, the salt intake should be in correct balance for good health.

Why is Sodium Essential?

Sodium is primarily involved in the maintenance of water balance and equilibrium. It also plays an important role in electro-physiological functions of the cell.

Sodium is rapidly absorbed from the gastrointestinal tract and a positive balance is achieved on intakes just above minimal requirements. Sodium requirements depend on the losses through urine, faeces and sweat. The sweat loss varies according to climatic conditions. High ambient temperatures and vigorous physical exercise increase sodium loss through sweat.

Eating salt more than the recommended amount raises the amount of sodium in your bloodstream. As a result, it wrecks the delicate balance by reducing the ability of your kidneys to remove water from your body.

The result is higher blood pressure due to the extra fluid and extra strain on the delicate blood vessels and heart. It may also eventually lead to a heart attack.

So, how much of salt is too much?

WHO recommends a daily intake of 5 gm of salt. However, Indians consume way beyond the recommended values. The average daily salt intake of the Indian population is approximately 11gm of salt.

The southern and eastern states of the country predominantly have more salt in their meals. The urban population has it even more in the form of packaged foods, chutneys and pickles. Salt is used as preservatives in most of the edible items.

The different types of salt

There are various types of salts available in the market like Gray sea salt, Himalayan pink salt, smoked salt, and Hawaiian salt etc. Some make health claims asserting that they are purer or that they contain other minerals that are good for health. The truth is, though the taste and aesthetic appearance may be different, our blood pressure can’t tell the difference. The same holds true for seasoned salts, like onion salt or celery salt.

The Various Sources of Salt in our Diet

Raw salt is an important component used during cooking in every household. In addition to salt which is added in our food, there are other sources from where we obtain salt. These are:

How does one reduce the Salt-Intake?

A balanced salt intake can be attained by observing the following:

Too much of anything is good for nothing. Likewise, while salt is essential for any cooking and also for the enhancement of taste, it should be used in moderation so that you can enjoy a healthy and hearty life! If you happen to suffer from hypertension you can simply ask a doctor online and get the correct advice regarding salt intake for your diet.