Seasonal Health issues in the Monsoons and how to prevent them 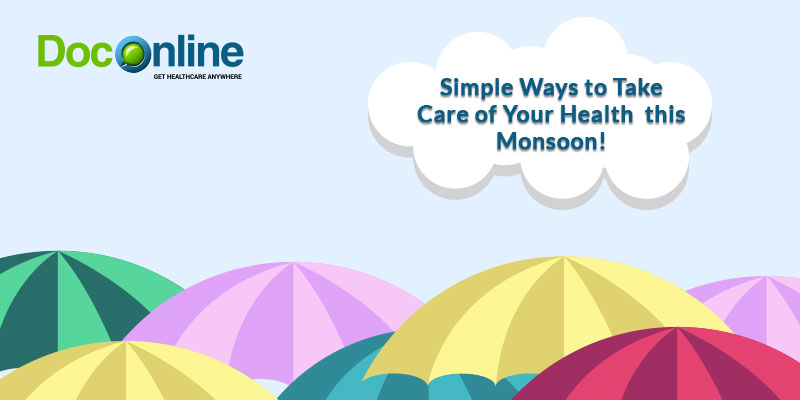 “Ah-choo, Oh God! This annoying fit of sneezing” – the common grumble during the monsoon. While we eagerly summon the rain drops to soothe our prickly heat rashes, we often send out an unwanted invitation to the monsoon maladies in return. Universally acclaimed as “The Unifying Bond”, the season has its own charm in various ways ranging from revitalization of flora and fauna to the renovation of the agricultural calendar.

However, this is the time of year which keeps mothers on toes, as the flu season finally arrives. From writing leave application in school diaries to applying for sick leaves in office registers, the season is already viral. The monsoon weather brings along with it its set of challenges. While, chai and samosas are the most awaited monsoon craving regales of the time, on the other hand the ceaseless rains, wet clothes and running noses wrap us up in some mixed feelings about the season.

Supporting the breeding grounds for germs and bacteria, the season is famous for a huge number of water and vector borne diseases. The infectious weather contaminates the entire ecosystem. This cautions every individual about their lifestyle and hence, one must take precautions against the common diseases during rainy season.

Water contamination is the greatest concern during the season. With seasonal concentration changes in groundwater due to unhygienic substances getting dissolved, and further swayed over by rain water, we cannot expect clean water to arrive at home during this period.

Cholera, Jaundice, Typhoid, and Dysentery are the most common water borne diseases that are caused by drinking contaminated or dirty water. “Water water everywhere, not a drop to drink”, the line from “The Rime of the Ancient Mariner,” by Samuel Taylor Coleridge is quite apt at this juncture. While we crave for a hydrated atmosphere after the torrid summer, the season has its own take over human kind. The above-mentioned are the diseases that spread during rainy season and we must be aware of them.

Consuming street food during monsoon is the most dangerous thing as it gives rise to such ailments. The bacteria that causes cholera is mostly found in contaminated food or water. Therefore, food items prepared outside run the risk of causing stomach infection.

So, it is always favourable to remain cautious & drink purified water or boiled water during the season to avoid falling ill.

Protect your skin - The Monsoons can be worse than the heat rashes!

The beauty of the monsoon can be a threat to your own beauty. Whether a romantic drive or a fun ride in the rain, a visit to the dermatologists can be on the cards next. It’s that time of the year when the nasty fungus plays its own game. The moist climate gives room for bacteria and fungus to infect the air around us. Hence acne, ringworms are the most common skin diseases reported during the season. Humidity and the toxic effect of the sun also wreaks havoc on the skin. Self-Care and maximum hygiene is the need of the hour. Keep yourself dry and clean. Avoid over exposure to sun and drink lots of water to keep your body hydrated. Wear a sunscreen with supported Sun Protection Factor (SPF) before stepping outdoor to avoid the sun burn and rashes. Water proof footwears are highly recommended, which can guard your skin from the dirty flooded water in the street. Also, it is recommended to take a shower if you get drenched in the rain to balance out the temperature. Carry an umbrella or a rain coat to avoid getting drenched and the rainy season health issues associated with it.

Do you think, it’s just the splash of the droplets that matter alone? No, it’s the unwanted intimation of the vectors that we fear. Spread by the female anopheles mosquito, malaria, is the most common disease. With constant water logging and floods, the mosquitoes breed at a faster rate giving rise to diseases like malaria, dengue, chikungunya virus etc. Hospitals remain alarmed with the constant rise of patients holding similar symptoms with low platelet count. With the highest number of deaths credited, malaria still stands as one of the most dangerous diseases in India during this season. Fever at regular intervals, shivering attacks, muscle pain, are the symptoms that a patient shows while suffering from malaria. Hence, prevention is always better than cure. It is important to ensure there is no water clogging around your area. Besides, never forget to use mosquito repellent and nets to avoid the infectious bite.

“Owing to Cough and Cold!”, the prevailing statement for absenteeism

Whether going to school, market or offices, take shower more often during monsoon. It’s almost everyday that we get wet and spend the rest of the day soggy increasing the chances of catching cold. Suddenly, we sneeze and further infect the surroundings, thus spreading the common cold virus. So, its better, we carry an extra pair of clothes to avoid catching cold and aggravating the health condition.

What’s wrong with our immune system? Why do we have to fall sick in monsoon?

Our immune systems become more vulnerable during monsoons. Experts say that the white blood cells tend to weaken due to temperature fluctuations. This reduces our resistance and hence, we fall sick so often.

Self-medication can be harmful

We should always take necessary action to prevent falling ill, however the idea of self-medication is complicated and sometimes dangerous. A pain killer may cure the headache for a given period, but it also means you are allowing an underlying medical condition to go undiagnosed. It’s better to see a doctor in the first place without letting the condition get out of control.

Too less time for a doctor’s appointment

Agreed! Amidst the regular hustle and bustle, it’s not easy to go see a doctor on time. But thanks to the waves of technologies that have always come to our rescue. Telemedicine services are the latest addition to help us get treated on time without spending much of our time. Primary consultation can be done via online doctor consultations from anywhere and anytime. These prevent health conditions from deterioration any further. If you happen to sneeze for continuous one hour in office and really feel heavy headed, you may always consult a doctor sitting at your desk, without having to take a leave. This can be achieved by accessing an online doctor app from your mobile phone.

Thus, come monsoons and enjoy the splash of rains. But do take the necessary precautions to keep all diseases at bay. Besides, should you still succumb, your telemedicine doctor is just a call away!