Which Cooking Oil is Good For Health? 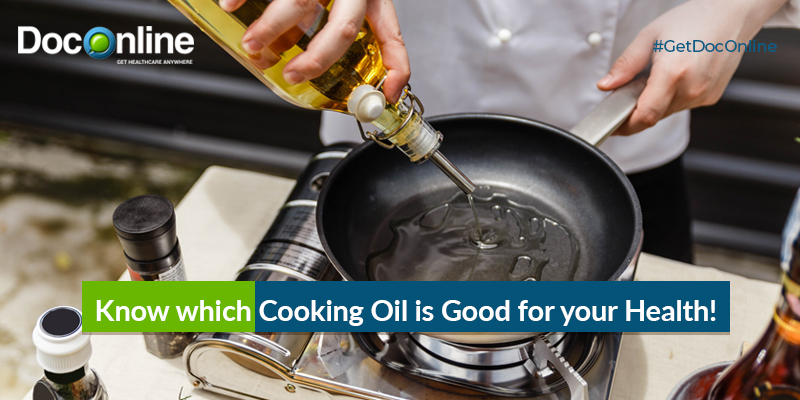 The waft of the aroma from the kitchen tantalizes the senses and draws you in. Yes, cooking is in progress and you quip, “What’s cooking for dinner?”

One of the most important ingredients used in cooking is the ‘cooking oil’, which is used for everyday cooking, deep frying, baking, salad drizzling, and the list goes on. So, let us understand what it is all about and which oil is best for our bodies.

First, what is oil? It is a type of fat, which we regularly consume. Once digested, the fatty acids help in the functioning of our body’s cells, cell membranes, hormones and neurotransmitters. They are also important for our skin, hair and nails. Besides, they keep us warm and cushion our internal organs. Fats and oils are used for energy production and provide the most energy per gram among all macronutrients.

In India, the cooking oil used in your kitchen largely depends from where one hails. For example, in Kerala, it's the coconut oil; in Andhra and Rajasthan, it’s sesame oil; in the East and North they use mustard oil and in central India and Gujarat, groundnut oil is used. As different cultures have different food habits, the type of oil fits beautifully into the food landscape of that particular region.

Cooking oil contains fat and hence, it’s important to balance the amount of fat we consume and the energy we expend in order to prevent obesity.

Therefore, the greater the proportion of mono and polyunsaturated fatty acids contained in a particular fat or oil, the healthier it is.

Which One To Choose?

Choosing a good cooking oil is a daunting task. On one hand, you need to use a cooking oil that has a healthy balance of Omega 3 to Omega 6 fatty acids and even better, if the oil is loaded with antioxidants and vitamins. On the other hand, you want to cook with an oil that has a high smoke point.

SMOKE POINT is a point or temperature where oil begins to smoke and produce toxic fumes with harmful free radicals. Any oil when heated beyond the smoke point loses its nutrient value.

It contains medium chain fatty acids and lauric acid to burn off stubborn belly fat. It reduces inflammation, aids in detoxification and is very good for maintaining skin moisture.

Used largely in Asian food. It is almost free from cholesterol and is low in saturated fat content. It is used commonly for frying. This oil is rich in resveratrol, which is known to prevent degenerative nerve disease.

Made out of sunflower seeds, it is called sunflower oil. It has good mix of mono saturated and polyunsaturated fatty acids. It has a high smoke point, which means it holds nutrient content even at higher temperatures. So, it is widely used for deep frying.

It is a rich source of unsaturated fatty acids. It has a neutral flavour and goes well with dishes. It has a high smoke point and can be used for deep frying.

This oil is a widely used in Indian cooking. Its consumption helps the intestine to produce digestive juices. It is antibacterial, antifungal and anti-inflammatory.When taken orally in raw form, mustard oil can cause irritation and inflammation of the lungs, gastrointestinal tract and intestines.

It is rich in antioxidants that lower blood pressure and also boosts your immune system. It is good for salad dressings but not for high temperature cooking. Used mostly in Mediterranean region and is known for being heart friendly.

This oil is made from the crushed seeds of canola plant. A recent entrant into the Indian market. It has the lowest saturated fat content as compared to any oil. It's seen as a healthy alternative because it is rich in monounsaturated fats and is high in Omega 3. It has a medium smoking point and works well for fries, baking, sautéing etc.

Rice bran oil is made from the outer layer of the grain of rice. It has mild flavour and a high smoking point. It improves cholesterol and triglycerides, but it lowers the blood calcium in the body. Too much of it sometimes causes irregular bowel movement.

There are also some other kinds of oils, which are not very often used in India like grape seed oil, avocado oil etc.

Thus, no need to get carried away by commercials and buy expensive oils Rather, know your oil and its purpose and then use it accordingly. What was used traditionally was always the best. Be it ghee or any other traditional oil like coconut oil, they have always been healthy for the body when used in the right quantity.